Frogger (フロッガー (Furoggā)) is a 1981 arcade game developed by Konami. It was licensed for North American distribution by Sega–Gremlin and worldwide by Sega itself. It is regarded as a classic from the golden age of video arcade games, noted for its novel gameplay and theme. The object of the game is to direct frogs to their homes one by one by crossing a busy road and navigating a river full of hazards.

Frogger was positively received and followed by several clones and sequels. By 2005, Frogger in its various home video game incarnations had sold 20 million copies worldwide, including 5 million in the United States. The game found its way into many areas of popular culture, such as television and music, as well as sparked healthy competition in the video game world.

The game starts with three, five or seven frogs, depending on the settings used by the operator. These are counted as the player’s lives, and losing them results in the end of the game, or “game over.” The only player control is the 4 direction joystick used to navigate the frog; each push in a direction causes the frog to hop once in that direction. The number of simultaneous players is one, and the game has a maximum of two players.

The objective of the game is to guide each frog to one of the designated spaces at the top of the screen, also known as “frog homes.” The frog starts at the bottom of the screen, which contains a road with motor vehicles, which in various versions include cars, trucks, buses, dune buggies, bulldozers, vans, taxis, motorcycles, and even bicyclists speeding along it horizontally. The player must guide the frog between opposing lanes of traffic to avoid becoming roadkill, which results in a loss of one life. After the road, there is a median strip where the player must prepare to navigate the river.

The upper portion of the screen consists of a river with logs, alligators, and turtles, all moving horizontally across the screen. By jumping on swiftly moving logs and the backs of turtles and alligators the player can guide their frog to safety. While navigating the river, the player must also avoid the open mouths of alligators, snakes, and otters. The very top of the screen contains five “frog homes,” which are the destinations for each frog. The player must avoid alligators sticking out of the five “frog homes,” but may catch bugs or escort a lady frog which appear periodically for bonuses.

Softline in 1982 stated that “Frogger has earned the ominous distinction of being the arcade game with the most ways to die.” There are many different ways to lose a life (illustrated by a “skull and crossbones” symbol where the frog was), including: being hit by or running into a road vehicle, jumping into the river’s water, running into snakes, otters or an alligator’s jaws in the river, jumping into a home invaded by an alligator, staying on top of a diving turtle until it has completely submerged, riding a log, alligator, or turtle off the side of the screen, jumping into a home already occupied by a frog, jumping into the side of a home or the bush, or running out of time.

When all five frogs are directed home, the game progresses to the next level with increased difficulty. After five levels, the game gets briefly easier before yet again getting progressively harder after each level. The player has 30 seconds to guide each frog into one of the homes; this timer resets whenever a life is lost or a frog reaches home safely.

Every forward step scores 10 points, and every frog arriving safely home scores 50 points. 10 points are also awarded per each unused ​1⁄2second of time. Guiding a lady frog home or eating a fly scores 200 points each, and when all 5 frogs reach home to end the level the player earns 1,000 points. A bonus frog is given at 10K or 20K, and none thereafter. 99,990 points is the maximum high score that can be achieved on an original arcade cabinet; players may exceed this score, but the game only keeps the last 5 digits.

The game’s opening tune is the first verse of a Japanese children’s song called Inu No Omawarisan (The Dog Policeman). Other Japanese tunes that are played during gameplay include the themes to the anime Hana no Ko Lunlun and Araiguma Rascal. The United States release kept the opening song intact and added “Yankee Doodle Dandy”.

Ed Driscoll reviewed the Atari VCS version of Frogger in The Space Gamer No. 58. Driscoll commented that, “All in all, if you liked the arcade version, this should save you a lot of quarters. The price is in line with most cartridges. It also proves that Atari isn’t the only one making home versions of the major arcade games for the VCS.”

Danny Goodman of Creative Computing Video & Arcade Games wrote in 1983 that the Atari 2600 version of Frogger, “is one of the most detailed translations I have seen”, noting the addition of the wraparound screen.

In 2013, Entertainment Weekly named Frogger one of the top ten games for the Atari 2600.

Frogger was ported to many contemporary home systems, meaning its software was adapted to be used on different systems. Several platforms were capable of accepting both ROM cartridges and magnetic media, so systems such as the Commodore 64 received multiple versions of the game. 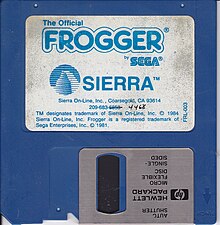 Sierra On-Line gained the magnetic media rights and sublicensed them to developers who published for systems not normally supported by Sierra (e.g. Cornsoft published the official TRS-80/Dragon 32, Timex Sinclair 1000 and Timex Sinclair 2068 ports). Because of that, even the Atari 2600 received multiple releases: a cartridge and a cassette for the Supercharger. Sierra released disk and/or tape ports for the C64, Apple II, the original 128k Macintosh, IBM PC, Atari 2600 Supercharger, as well as cartridge versions for the TRS-80 Color Computer A version for Sinclair developed by UK-based Cornsoft.

Frogger was also ported to the Gakken Compact Vision TV Boy as one of the 6 launch titles.

Hasbro Interactive released a vastly expanded remake of the original for Microsoft Windows and the PlayStation in 1997. Unlike the original, the game consisted of multiple levels, each different than the preceding one. It was a commercial success, with the PC version alone selling nearly one million units in less than four months.

In 1998, Hasbro released a series of ports of the original game for the Sega Genesis, Super NES, Game com, Game Boy, and Game Boy Color. Each port featured the game with different graphics, with the Sega Genesis port featuring the same graphics of the original arcade game. The Sega Genesis and SNES versions are notable for being the last games released for those consoles in North America. Despite using the same box art of the 1997 remake, the ports are otherwise unrelated to the 1997 game.

In 2005, InfoSpace teamed up with Konami Digital Entertainment to create the mobile game Frogger for Prizes, in which players across the U.S. competed in multiplayer tournaments to win daily and weekly prizes. In 2006, the mobile game version of Frogger grossed over $10 million in the United States. A Java port of the game is available for compatible mobile phones.

A port of Frogger was released on the Xbox Live Arcade for the Xbox 360 on July 12, 2006. It was developed by Digital Eclipse and published by Konami. It has two new gameplay modes: versus speed mode and co-op play. Some of the music, including the familiar Frogger theme, was removed from this version and replaced with other music. This version was included in the compilation Konami Classics Vol. 1.

Unofficial clones include Ribbit for the Apple II (1981), Acornsoft‘s Hopper (1983) for the BBC Micro and Acorn Electron, A&F Software’s Frogger (1983) for BBC Micro and ZX Spectrum, PSS’s (Personal Software Services) Hopper for the ORIC 1 in the UK (1983) and a later release for the ORIC Atmos, Froggy for the ZX Spectrum released by DJL Software (1984), Solo Software’s Frogger for the Sharp MZ-700 (1984) in the UK, and a version for the NewBrain under the name Leap Frog.

Several clones retained the basic gameplay of Frogger while changing the style and/or plot. Pacific Coast Highway (1982), for the Atari 8-bit family, splits the gameplay into two alternating screens: one for the highway, one for the water. Preppie! (1982), for the Atari 8-bit family, changes the frog to a preppy retrieving golf balls at a country club.

Frostbite  (1983), for the Atari 2600, uses the Frogger river gameplay with an arctic theme. Crossy Road (2014), for iOS, Android and Windows Phone, has a randomly generated series of road and river sections. The game is one endless level, with only one life and a single point given for each forward hop.

The Atari 2600 game Freeway is often considered a clone of Frogger, but each game was developed independently of the other and both were released in 1981.

In 2008, the City of Melbourne created a spin-off called Grogger as part of a public service campaign to encourage people to take safe transportation home after a night of drinking.

Frogger is tied to American popular culture and can be found in film, television, music, and more. In 1983, Frogger made its animated television debut as a segment on CBS‘ Saturday Supercade cartoon lineup. Frogger was voiced by Bob Sarlatte and worked as an investigative reporter. The segment aired for one season. In 1998, the game was featured in the Seinfeld episode “The Frogger“. Jerry and George visit a soon-to-be-closed pizzeria they frequented as teenagers and discover the Frogger machine still in place, with George’s decade-old high score still recorded. He buys the machine and tries to get it across the street without letting it lose power, which would erase the high score with his initials “GLC”. In the Season 4 episode of George Lopez, “Friends Don’t Let Friends Marry Drunks”, George says to his son Max “play the one where the frog tries to cross the street”, an obvious reference to Frogger, which also appears in the films Wreck-It Ralph, Pixels and Ralph Breaks the Internet.

Music in which Frogger is referenced can also be found. In 1982, Buckner & Garcia recorded a song called “Froggy’s Lament” using sound effects from the game and released it on the album Pac-Man Fever. Punk band Bad Religion recorded a song called “Frogger” about the traffic in Los Angeles. In the song, which includes a sample of the game’s theme music at the beginning, frontman Greg Graffin claims to be “playing Frogger with my life”, as a result of the traffic. The song was included on the band’s 1985 EP Back to the Known and 2004 remaster of their debut album How Could Hell Be Any Worse?. The UK girl group, Sugababes, sampled the coin-insert tone of a Frogger game in their 2002 hit single “Freak Like Me“.

In addition to film, television, and music, Frogger can be found in popular culture in other mediums as well. In 2006, a group in Austin, Texas used a modified Roomba  dressed as Frogger to play a real-life version of the game. In the realm of science, Frogger is the name given to a transposon (“jumping gene”) family in the fruit fly Drosophila melanogaster.

Hello, is it us you're looking for (ahem!)... We use cookies to improve your experience of our site. It allows us to work harder, the site loads faster, so you can stay longer and make us feel better. By using our website you consent to all cookies in accordance with our Cookie Policy.